The protective styling gets its name from the uniformed box shape and designs created when sectioning and parting the hair for individual plaits. Typically you start off the unique styling by separating and sectioning strands of hairs into even groupings of different lengths or widths. One of the best parts is the plaits can be combined with synthetic fibers or natural hairs and manipulated to create endless hair-stylings! 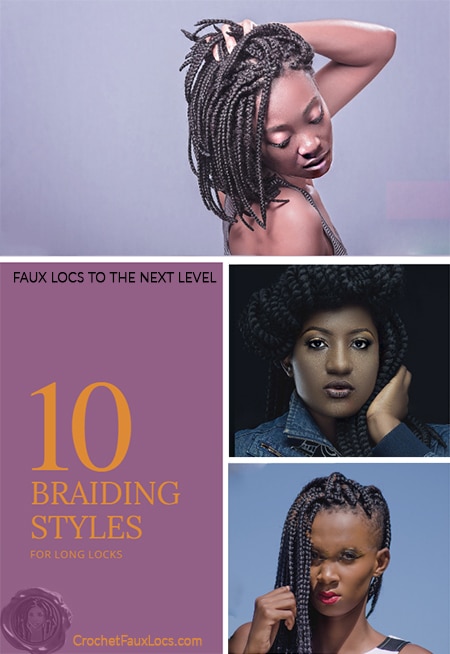 If you are trying to stay ahead of the wave and look good as we get back outside and enjoy the corona-free summer, then grab your camera cause we got the hottest looks!

Rock a hairstyle with No Box Braids on The Sides with the use of cornrows or shaving all the hair off in wonderful designs. 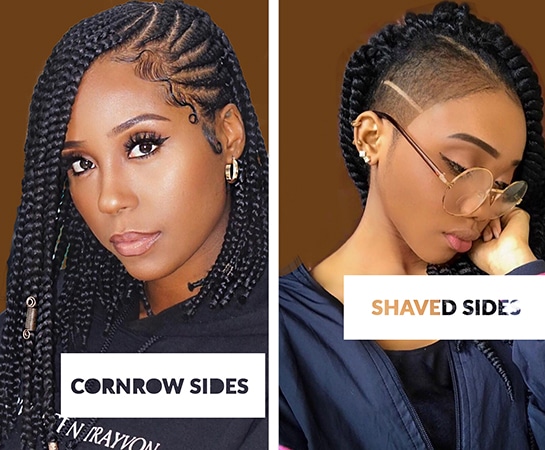 Truly stand out with bright ORANGE colors that show off your Expressive personality. 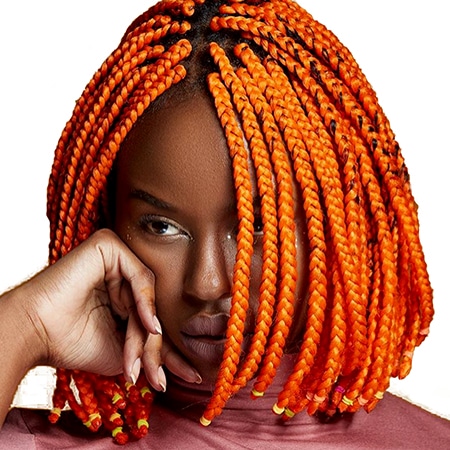 Turn heads on the beach with a style that screams local and exotic at the same time. Grab some Bohemian styled Box braids! 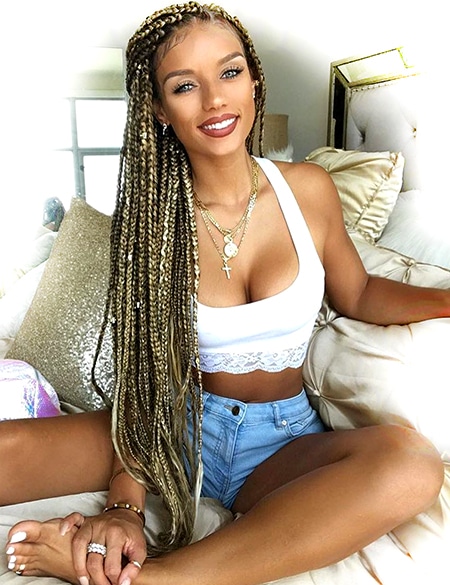 PURPLE is the color for 2021, go with a standard or platinum just a touch of lighter highlights. 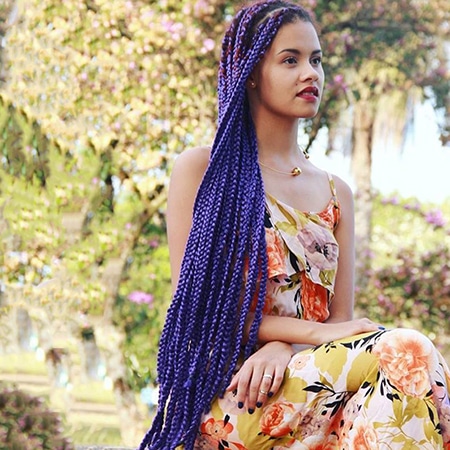 Change it up, and don’t just choose one color. Use Ombre and Balayage shading techniques to combine two colors into one styling! This looks amazing, especially with pink and black colors as your base! 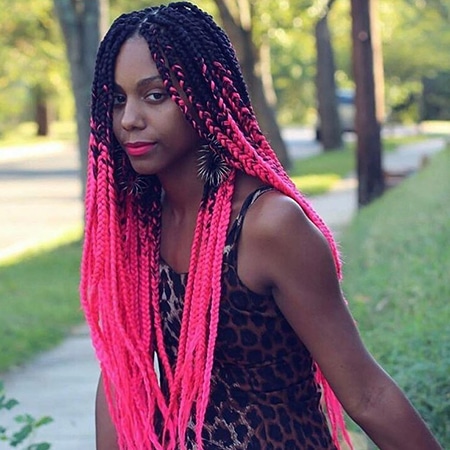 Get your star wars on and rock these awesome box braid space buns, tops it off with a delicious candy cane mix of bright red and bleach white! 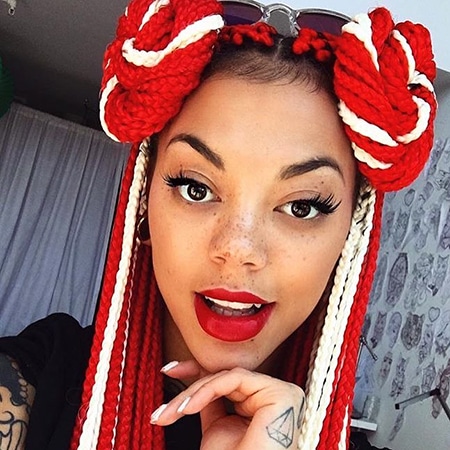 HALF UP HALF DOWN BOX BRAIDS

Regular box braids can be spiced up, throw it all in a bun and grab your favorite dreadlock beads and cuffs to rock out the Jamaican and island feel. 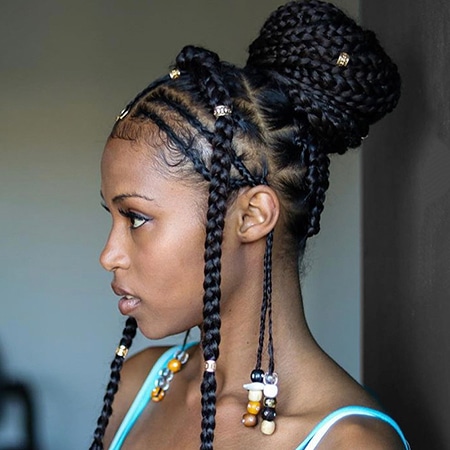 Size doesn’t matter with braids. Make them with smaller sections and create MICRO BRAIDS. Get them in white to really catch the eye of a storm! 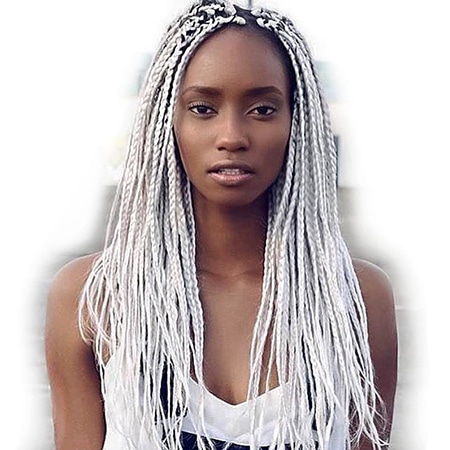 If you cant go small then go big. Sizes bigger than 1″ are often referred to as jumbo Box Braids and look awesome while they display the 3 strand braid pattern. 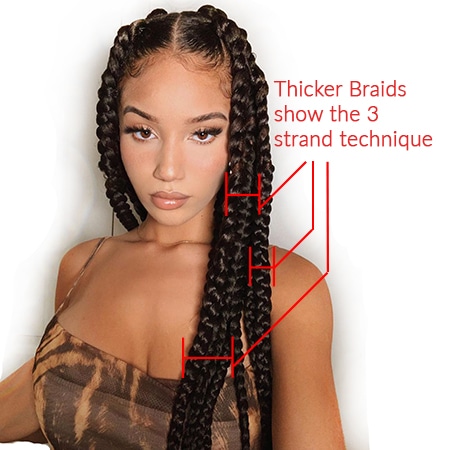 Don’t stick to just one color and rock them all with a Mulity Color Box Braid Hairstyle that Has Everything You Need to Stand Out! 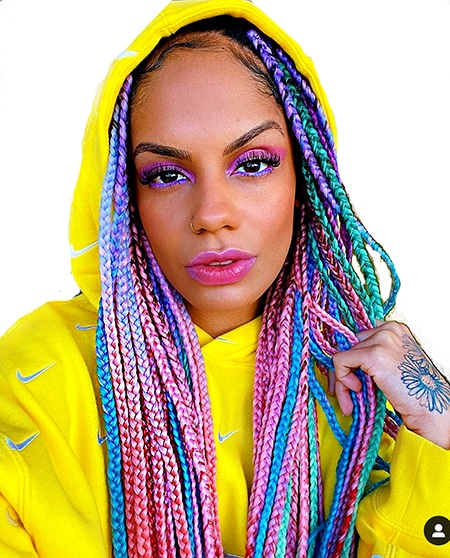 Choosing the right style isn’t going to always get you the look you want. Sometimes you have to add some box braid accessories that will spazz up that hairstyle.

One of the easiest ways to spice up those braids is with some box braid beads. Beads come in all shapes and sizes ranging from small to large to fit any braid width. Get your beads in wood, metal, glass, and stone. Most beads are going to simply slide over your braid. For an added uniqueness, try and add beads into the plaits as you are braiding.

If you are going for a gypsy or bohemian styling you are going to need more than just colorful box braid beads. The hottest styles are going to require specialized accessories like feathers, threads, cowrie shells, and jewelry.

Box braid jewelry comes in all kinds of fashions. You can go with shiny metal and copper coils or spice it up with a quarts stone wrapped in gold filery.

Check out our loc accessories page for more wonderful and inspirational tips on how to accessories those box braids.

The technique of achieving these wonderful styles is said to be recorded all the way back to 500 B.C. Historians have sculptures from the ancient Nok civilization of Nigeria. The ancient sculpture has designs on its head of braiding patterns and cornrows. It is said to be as old as 500 B.C.

Skip a couple of centuries and we start to see more records in the 15th century with ancient African civilizations wearing box braids.

In the 15th century, hair often played a big role in the cultures of Africa. Many tribes used braiding hairstyles to symbolize social status, marital status, fertility, and family background.

In 16th century Africa, tribes began to use braid color, thickness, and length to signify one’s age, religious beliefs, kinship, wealth, and a form of self-expression.

Braids began to evolve to become the regular style we see all over the world today. The funny thing is, box braids were not widely called braids until the 80s and 19-90s when an artist like Janet Jackson in “Poetic Justice” and Beyoncé in her music videos, popularized the stylings in the United States.

Box braids and plaits have to lead to the creation of Faux Locs. Faux locs are imitation dreadlocks that are often attached similarly to box braids or the hair crocheted into cornrows. If you would like to learn more about Faux locs click here and read our wonderful article!

This hairstyle doesn’t sit on your head like cornrows. Even though the style often uses the same braiding technique, the hairs are braided away from the head to create the plaits.
Plaits are formed by interlacing two or more flexible strand materials together to create a complex structure. Multiple strands like yarn, wire, and hair can be grouped together to form strong cords or ropes.

To begin box braids wash your hair. Really wash it, don’t just throw some shampoo on your head and rinse it out. If no one told you to scrub in the past, scrub! You need to remove build-up and clean up the hair for a better look! Washing will remove oils so make sure to finish off the wash with nice conditioning to lock in moisture!

The hair needs to be broken up into groups of desired widths. Depending on how big you separate these sections will determine how many box braids you can make. This is where box braids get their distinctive appearance. If you want jumbo box braids, you will only have 5 or 6 actual plaits. It’s best to separate the hairs into smaller groups the size of a regular highlighter. Use rubber bands to hold the groupings together till your ready to braid.

Box braids get their structural shape from the unique patterns used to interlock the strands. Select one of the hair batches you just created and separate the hair into two, three, or four groups. Begin to interlace the strands over each other in the same re accruing pattern.

The tighter you keep the overlapping of each strand, the tighter the end braid will end up. Some styles require you to leave the patterns looser and distressed like the famous Boho long box braid styling.

Finish the overlapping pattern all the way down the hair creating a long plait away from the head. When you reach the tip, you have multiple options to get the hair to hold from unraveling.

Repeat the same process on all the groupings of hairs. Depending on the length of each box braid will determine what hairstyles you can pull off. Braids can be worn half-up, ponytail, in big box braids, and in small box braids.

Box braids are very low maintenance. The style holds all your hair together and typically only needs attention every 2 weeks. Your hair stylings can be left in for long time periods without much hair care. The low maintenance makes it very desirable to a hairstylist who often use the styling as a base to create more permanent updos like crochet faux locs and goddess locs.

Box braids are difficult to ruffle up. The most common area to damage the styling is in the bed. Sleeping and constant abrasion will cause hair strands to pull out of place and create frizz. Because the patterns of box braids repeat, it’s easy to see when strands of hairs are out of place. Try to sleep more still and use a silk bonnet to cover and protect the braids.

Hair is always growing and changing. The hair is nourished from the hair follicle that grabs sebum from the sacks located near the root. Sebum can help with the collection of dust, lint, dirt, and dead skin from the scalp. Is important to wash this out of your hair regularly for good scalp health.

Washing your hair, weather, and your diet can have an effect on your hair’s hydration. It’s best to use a moisturizing conditioner and do moisturize when you notice a dry scalp. Dry scalp and follicles can lead to breakage of the real hair.

DO BOX BRAIDS RUIN YOUR HAIR?

Box braids are a great protective style. As long as the box braids are not too tight or chunky and cause excess tension on the scalp that pulls your hair follicles. When you add hair extensions to natural hair, you have to be careful of the added weight, especially when you retwist braids during regular hair care.

Protective hairstyles protect the human hair and follicle to allow natural and healthy growth and maintenance.

WHAT IS THE AVERAGE TIME IT TAKES TO INSTALL HAIR BRAIDS?

Two to three hours. Because of the intricate patterns required to make box braids, usually, the style is created by an experienced hairstylist. The patterns are not hard to learn and can be picked up from online tutorials. It’s best to prep hair with a special conditioner to help with moisturizing your scalp. The time to complete this styling is dependent on the amount of hair, the number of braids, and the braider.

The interlocking patterns have been around for thousands of years. Black women of Africa wore cornrows, braids, and dreads as early as 340B.C. Ancient Nok civilization of Nigeria depict sculptures engraved with black hair in braid patterns. Traditional Mende sculpture can be seen with hair braid patterns chiseled all over their heads. Other braided styles that were popular along with box braids were the Bantu braids, short box braids, bob box braids, other curly hair braid variations.

WHAT ARE SOME OTHER BOX BRAIDING HAIRSTYLE OPTIONS?

BOX BRAIDS NEAR ME

Box braids are a simple styling when you have complete them many times before. If you need help styling or creating those braids you will near to find a certified braider to put in those box braids near you.

Box braids can be created and styled to look like many braided updos. The look has cultural history and can be used to express many hierarchy statuses. We appreciate you taking the time to stop by. Make sure to read some of our other great articles. If you have any comments, please leave them below to help us help you!